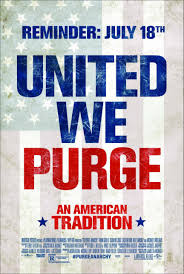 I saw The Purge opening night. and boy was it a fright! No, not really. The movie was sub-par at best and was really short. “How short was it Jacki?” An hour and 20 minutes long.  Now, I know that’s only 10 minutes shorter then what an average film is (90 minutes) but for a psychological thriller/horror movie like The Purge  you walk away from the movie feeling empty and that your 10 bucks wasn’t worth that short of a ride. And that’s exactly how it felt.

The character depth and fight scenes in this movie are laughable at best. And that isn’t something you want to hear when your watching a family survive the hellish experience of strangers breaking in to your house on the one night that Americans can “release the beast.” If your getting this far into my review and you don’t know what the movie is about, here let me show you with this trailer:

I mean your on the internet why waste my effort explaining the plot when those flashy pictures can do it for me? So, now that you know the basics, next on the list is the fact that this movie is terrible and you shouldn’t waste your time with it. Looking back in retrospect, none of it was scary. The director had one “good” “boo” moment which scared half of the crowd but the other half laughed. I on the other hand knew it was about to happen. It’s awfully disappointing that this movie turned out to be half-assed.

In the beginning I didn’t want to see the film because it seemed so sadistic. One nation uniting under sin? America being that nation? That underlining plot line is sick. I think that the movie would have been more interesting (and a bit longer) if it  focused on different stories happening throughout the night, and not just one family. Watching how one family that shouldn’t have been part of the purge because they had a top notch security system (spoilers, it’s not top notch), and because their son who doesn’t believe in the purge lets some “homeless swine” into their home, isn’t as entertaining as watching the whole country turn to a shit hole.

That’s what writer/director James DeMonaco should have done. He could have focused on that story line and other parts of the country. It’s not like he doesn’t think about it. He shows footage in the beginning from the “purge feed” which is taken from all over the country. Showing the audience that America is united in this unforgivable feat where murder is legal for 12 hours. I know the entire movie is a satire on today’s economic system and today’s moral/belief system, but damn he could have done a better job about it. I really can’t tell what political party he is taking a jab at, but honestly it leans towards taking a knife to the Democratic party.

In many of my film classes I was taught why vampires and zombies go through their popular phases. And I’ll tell you right now it has nothing to do with horny teenagers. The box office horror genre is almost completely based off of who ever is in office at the time. If vampires are a hit it’s because democrats are in office, and if zombies are raging, it’s because republicans are in. Don’t believe me? Watch this video!
Watch it? Good. So if horror  in the box office represents America’s current political party, this movie symbolizes Obama’s healthcare and new economic system? DeMonaco, I had no idea you were such a raging republican!

Anyways, you yell at the character’s stupidity and the irony that the father James Sadin (Ethan Hawke) sells these high tech security systems. Which are (spoilers) shit. They look all bad ass and like they could withstand Armageddon. But they can’t. When the purgers come along to get their “homeless swine” who is camping out somewhere in the Sadin’s home, they rip it off with one fowl swoosh with the aid of a pick up truck. It was as if the giant steel walls were made out of tin foil from the Tin-Man. It was pathetic! If you knew your security system would be shit, why not just put all your money into a safe room? Oh would we have no plot then? Whoops, it’s all ready been done, hasn’t it?

Okay, I’m done bitching. Wait to see the movie for free. Seriously, just download it off the internet in a week. It is so not worth 10 dollars.

One last thing. If you’re that goddamn rich, take a vacation to another country! No where in the film does it say any other country is as bat shit insane as America! For Christs sake, try Canada for a day you dumb fucks!