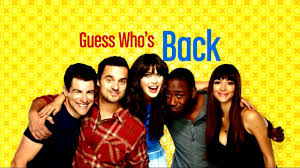 Season 3 of New Girl opens up with no time lost between Season 2’s final episode. And season 3 seems like it will keep on delivering the quirky, adorable laughs that Zooey Deschanel, Jake Johnson (Nick), Max Greenfield (Schmidt) and Lamorne Morris (Winston) delivered in the first 2 seasons.

The season opens up with Jess and Nick arriving back at the door of their loft after they decide to go “all in” with dating one another. It’s surprising that they are continuing with this development considering that every sitcom ever usually relies on the “will they, won’t they” tactic, they played that card pretty early on. Not to mention Jess being taken revokes any further chance of the parade of gorgeous men through the apartment. And come on, Jess had some pretty men strolling through all her hallways.

So Jess and Nick decide to avoid going into the loft by leaving all of their problems behind by going to Mexico, the “land of no problems!” As Jess and Nick abandon their responsibility in the states, Schmidt is having a mental break down with what could possibly be the biggest decision of his life. If you don’t recall, Cece (Hannah Simone) was about to marry an Indian man in an arranged wedding that she didn’t want because she was still in love with Schmidt. The entire last half of season 2, Schmidt was trying to win back/make Cece jealous. To try to prove to Cece he was over her (when she clearly was not) he brought one of his ex-girlfriends to the wedding.

So season 3: Cece calls the wedding off, and asks Schmidt to choose either her or Elizabeth, Schmidt’s chubby college girlfriend who not only took his virginity, but also loved him for him. When Schmidt can’t make the choice by himself, and his best friend Nick is nowhere to be found, Winston and Schmidt decide to become “best friends” and Winston helps Schmidt come to the conclusion that he wan’ts to be with Elizabeth. (You know as I’m typing this, it is easy to see that the driving plot line in this episode was Schmidt’s character development.) When he goes to break Cece’s heart, he can’t bare to do it, so he tells her she picked him. We can now tell that a deriving plot line in this season will be Schmidt as a two-timing ass hole, who yet has some sort of good heart underneath it all.

Anyways, the writing is still sharp and I think we can count on grade A/grade B jokes and enjoyable for the rest of the season. Click on the picture below to watch the recent episode to be ready for next weeks episode at 9 pm on Tuesday.