I was strolling about Netflix the other night, looking for something new and original (after watching the dreadful Paranormal Activity 4, don’t judge me, I wanted something horror related, & we all know how shitty Netflix’s Horror picks can be). I was rolling through the recently added section and saw an attention-grabbing title: Sexy Evil Genius. I read the synopsis: four strangers realize they’re all ex’s of a conniving, certifiably insane, seductive woman who gathers them at a seedy bar in the deep of L.A. It’s categorized as an Indie comedy, drama, mystery film. And it undoubtedly hits every category incredibly well.

Sexy Evil Genuis stars Katee Sackhoff as Nikki, the mysterious wildcard woman that always gets what she wants. When she calls her three biggest ex’s they drop what they’re doing and immediately show up at the requested bar. The first character we’re introduced to is her first boyfriend, her high school sweetheart, who had been so heartbroken when she dumped him he vomited on her blue platforms: Zachary Newman (played by Seth Green).

Next, we meet Nikki’s significant other she seduced while both of them were in rehab for heroin. Miranda Prague (Michelle Trachtenberg) a bisexual woman, who happens to be the only ex who ever quit Nikki, which was “tougher than kicking smack.” It is also insinuated that Nikki was her first woman. Zach and Miranda get to know each other after they realize they’re waiting to see the same enthralling woman at 8:00 pm. As they converse about their own experiences with Nikki, time passes and they begin to wonder if Nikki is late and alright. Especially since Nikki called Miranda and told her how she was out of the  “clink,” well, more of a mental hospital after she successfully claimed “insanity” for murdering her last boyfriend. 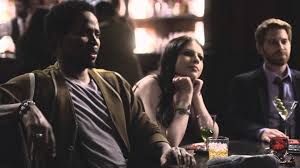 The jazzy black man, the bisexual woman, and Seth Green.

After 30 minutes pass, a dark, jazzy stranger joins the table, Marvin Coolidge (Harold Perrineau). He knows to join them because Nikki told him to look for “a goth babe and an uptight suit and tie.” Marvin eventually claims that they were all to meet up around 8:30, leading Miranda and Zach to realize Nikki did want them to meet before seeing her.

Soon after, they all receive the same text saying how Nikki is late due to traffic and they will all get to meet her “next victim” soon. Marvin, apparently not knowing this woman’s all-time favorite band, doesn’t understand that the text contains a lyric from the band “My Life With The Kill Thrill Cult.” Time passes and a thin blonde brings their tray of drinks over, along with a sprite and whiskey that weren’t ordered. The woman is greeted with confusion and smiles, it’s Nikki the heartbreaker. Each ex is greeted differently. Marvin first with a full body hug, Nikki lightly sits on Miranda’s lap and they exchange kisses on the cheeks, and Zach gets a full mouth kiss. Soon enough they party is joined by another character, a suit, Nikki’s lawyer Bert Mayfiare (William Baldwin).

From there on out the film is a whirl-wind of trickery and deception. The ride is phenomenal, and I highly applaud this movie as a great source of symbolism and metaphors in regard to human growth and stagnant. It peers into every person’s deepest and darkest regrets when it comes to a past lover and it even examines the current mistakes one may foolish make for self-preservation.

Sexy Evil Genius is one indie film that you could knock out during a lonely evening and feel as though you’re at the bar yourself.