There is a gem out there, a movie that is beyond quirky, fun, clever, and laced with satire, I mean, really it is a “B movie” with backbone and brilliance. It will have your attention from the very first clumsy clip of our pitiful protagonist, and it will not let go of you. This bright and shiny new film based on tired, dopey tropes is Dead Before Dawn and can thankfully be viewed on Netflix, which is where I just so happen to find it while perusing the horror genre. It’s a Canadian Indie film that didn’t get much traction here in the U.S. because if it did, you know for a fact, this bitch would had been watching the overused 3D tricks in theaters.  April Mullen directs the 90 minute 2012 film with a freshness that pays constant tribute to a tired genre and brings  Tim Doiron‘s goofy yet clever screenplay to life.

The Comedy-Horror takes place on what one must assume is a community college in Canada, and although the protagonists of the movie are nearing graduation, these kids seem like freshman or sophomores in age. Our lead is Casper Galloway (Devon Bostick), and I’m not sure how popular the name “Casper” is in Canada, but from my perspective, it’s a nod to the friendliest ghost we all know. Anyways, Casper is a clumsy, doodling boy who lives at home with his widowed mother, and is deathly afraid of his granddad’s “Occult Antique Store” because he kinda, sorta accidentally killed his father there. So, Casper has to watch this spooky antique store for an evening while his awesome cooky granddad, played by Christopher Lloyd, goes to an awards ceremony and receives a lifetime achievement award in the occult community? The movie ends up having a constant gag with a trophy throughout it, but hey an excuse to get the ball rolling for the film is good as any. It’s not like I was expecting a lot with this movie.

The Rag Tag group of nonbelievers: Dazzle, Becky, Seth, Casper (a smart believer, considering he’s the only one who prepares for the curse), Charlotte, Patrick, and Lucy

So, Casper decides to watch the shop for his granddad, and while he’s there his unattainable crush (Charlotte, played by that one girl from Superbad Martha MacIsaac) walks into the store as an apparent regular. She’s there with her best friend who happens to be a whorish cheerleader, Lucy (Brittany Allen), and who has no interest in the oddball hipster friend of Casper, Seth (Tim Doiron), who is desperately in love with her and mugs. Seth sells the crap out of mugs. After Charlotte and Lucy chit chat with Caspy for awhile, the rest of the gang arrives, including Seth, star football player and token black guy Dazzle (Brandon Jay McLaren), best chick friend Becky (April Mullen), and douchy bf of the unattainable; Patrick (Kyle Schmid). Now that the rest of the important cast has arrived, we can get into the hilarious manner in which the zombie demons, aka zemons, arrive.

The store has a creepy skull urn that no one should “ever come within spitting distance of,” but of course it is out on display on the highest shelf.

Said creepy urn. I mean it has a damn human skull on it.

Even though Casper is told to never touch the urn, it becomes a topic of conversation with his friends and he wishes to impress Charlotte (above), and then he drops it all because she brushes his hand. As the urn shatters, Casper freaks the hell out and claims “We’re all cursed! Doomed!” And his friends take about 5 minutes to then ridicule him and said curse, and apparently, what ever the people whom broke the urn said as the last ash fell to the floor would then happen is the new curse. Because that’s how curses work right? Anyways, to make an already long story short, as they make fun of such a “silly” topic, they claim who ever makes direct eye contact with anyone after 10 pm that night (because midnight is too cliche) the person will commit suicide, come back to life as a Zemon and make their creators and other bystanders into fellow suicide committing zemons  by giving them hickies. BUT! You can totally make one of the zemons into your salve if you can seduce and french kiss them. Like I said, they discuss what the would be curse would be for about 5 minutes. It’s a wonderful 5 minutes though, and it turns out to be a hilarious curse. 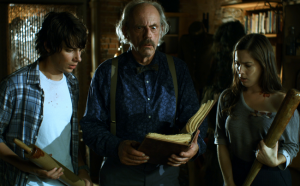 GREAT SCOTT! (Also this is the 2nd time Lloyd has played a zombie, whoops, spoiler, he makes eye contact with everyone in the shop.)

Of course, the rest of the film contains shenanigans leading up to the rag-tag group fighting off the zemons and breaking the curse before dawn, which gives them 6 hours to fix what they so royally screwed up. Dead Before Dawn has loads of amazing atheistic and verbal jokes, and is one of the best Indie Horror movies I’ve seen in a long time. I was weary about watching the film, but the fact that Christopher Lloyd was in it really helped me push play because GREAT SCOTT! He’s fucking Doc man, and he even says it! He says “GREAT SCOTT” and I flipped my shit! It was amazeballs.

I don’t want to spoil too much else about Dead Before Dawn but I highly recommend checking it out. The Zemons look pretty convincing and they have one really great panorama shot of Casper and Becky seeing the now Zemon covered football field, because remember, they set the curse time for 10 pm. The editors also use cut-to’s and montage scenes exceptionally well, and really add the funny edge while paying tribute to the overused tropes. And of course, we have a humorous nod to different weaponry that can be spotted in numerous zombie films, but oddly enough, no use of a religious symbol, a wasted opportunity, which leads me to believe that these Zemons are only zombies, the story writer must have really wanted to contribute to the horror lexicon.

All the characters are well developed and although the acting is sub-par, you’ll love the collaboration on screen. Each character really brings an individual feel to the film and there would be an emptiness without them. Very seldom can you say that each character is a key player in a film. No talent goes to waste. You can tell the cast and crew had a great time filming and writing the movie and you’re going to have just as much fun watching it.  Be sure to listen to the end credits as well, they wrote their own songs that tie into the film, and they’re just as great and super catchy.

If you’re looking for a fun, comedy horror movie to knock some time out, I highly recommend Dead Before Dawn, and if you’ve seen it, please comment below and tell me what you thought! I’ve read other, high class reviews, and I believe that those reviewers, were not the target demographic. Anyways, if my rave review doesn’t convince you, check out the trailer below and you’ll get just a taste of the wonderment I was talking about.