Once in a while, you get tired of the commercials and social media suggested posts and give in to a thing you’ve been getting bombarded over. That’s actually the whole point of online target sales, but occasionally, they get it right. Which is what happened to me and TBS’s little sleeper, soon to be a cult hit: Search Party.

I watch a LOT of TV. Some may say an unhealthy amount, but I kept getting commercials thrown at me for Search Party while just watching re-runs of South Park on Comedy Central. And then I kept seeing these cute social video posts and gifs of this stupid ass show and eventually gave in. END_OF_DOCUMENT_TOKEN_TO_BE_REPLACED 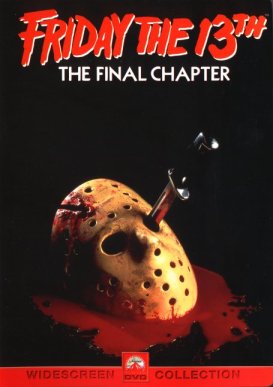 The Final Chapter opens with a montage that tells the audience about the killings of the previous 3 movies, regardless that certain deaths were not all committed by Jason.  This is probably why that bitch Casey got the question wrong and ended up killing Steve (I’m talking about 1996 Scream). Anyways, The Final Chapter has a lot to offer in this installment, aside from the fact that it is by far not the final chapter in the Jason franchise. But the mash up of the previous deaths is much better than replaying the last 10-15 minutes of the previous film. END_OF_DOCUMENT_TOKEN_TO_BE_REPLACED

I always found Friday the 13th Part 3 to be a fun installment of the series, but obviously not the best. Like many of the “Part 3s” of the horror genre in the 80s it was filmed in 3D. Not that 3D glasses would help in watching my Friday’s through a box set, but it does serve for some really cheesy moments in the film you know were supposed to be in 3D. None of which are scary, just a bloated cheesefest of an already tired trope. Even the music that plays during the tired 3D opening credits has gotten cheesier. It becomes this crazy, almost techno type of music being played over parts of Friday’s original score. END_OF_DOCUMENT_TOKEN_TO_BE_REPLACED

Yo dawgs, you heard I liked the Friday the 13th movies so I wrote some more Friday.

I just finished Part 2 of the Friday Franchise and there is a copious amount of interesting things that was presented while watching this film for the (insert # here) time. Between the original and Part 2, Part 2 has always been better to me even though Part 1 scores better on rotten tomatoes. I’m not sure why it has a worse score. Part 2 has a better cast, slightly more creative kills, the same piercing soundtrack, utilizes “Killer POV” more often, a more insightful plot, clever lines, and is much more crucial to the rest of the franchise. END_OF_DOCUMENT_TOKEN_TO_BE_REPLACED

A long long time ago, I was a young little thing around the age of 10 or 12 and found myself fascinated with the supernatural, including the lore around Friday the 13th. This lead to a young girl eventually marathoning  rater R Horror flicks right around October of 2011, about two years before she got to see her first Jason film in theaters, Freddy vs. Jason.

So here’s the plan, like I do near every Friday the 13th, I will be marathoning the Franchise. 12 movies in 12 days with 12 reviews. This includes posts on the 8 originals, 3 spin-offs, 1 remake, and at the end a drinking game.

END_OF_DOCUMENT_TOKEN_TO_BE_REPLACED

After watching the spectacular The World’s End, I might have decided to go on a Wright/Pegg kick, but you see it isn’t my fault. Wright/Pegg collaborations (the trilogy that we have now) end up doing notoriously well.  The three films have an average of 90.5% on Rotten Tomatoes, and Hot Fuzz rings in with a 91%. END_OF_DOCUMENT_TOKEN_TO_BE_REPLACED

The World’s End is a smart, clever, spectacular British comedy that we thick Americans should all be able to enjoy. It may have been about 5 years since the creative team behind Hot Fuzz and Shaun of the Dead has graced the screens around the world, but it was well worth the wait. END_OF_DOCUMENT_TOKEN_TO_BE_REPLACED

The Conjuring is the brilliant scary movie of the 2013 summer run. It’s awfully depressing that it’s taken me almost it’s entire run in theaters to see this certified fresh possession movie. Even though the trailer claims it’s “not a possession,” spoilers, in the end there’s always a possession.

The Conjuring is based on the “true” life events of Ed and Lorraine Warren (played by Patrick Wilson and Vera Farmiga) during the 70s. Why the 70’s? Because that’s when people could get away with haunted house bull shit and not be called bat shit insane on the internet or the news. The 70’s was a much different era, and it seems to be the favorite era of spooky specters who love tormenting the hell out of families who have just moved into new houses. Que to Ed and Lorraine Warren, a paranormal-investigating couple who help people across the East Coast (conveniently near Salem, Mass.)  with hauntings, possessions, cursed items, and any other thing that goes bump in the night. END_OF_DOCUMENT_TOKEN_TO_BE_REPLACED

A very cute, entertaining, young adult film was on Syfy yesterday. This movie was based off of a young adults book series that I read when I was younger, named Cirque du Freak, A Living Nightmare: The Sega of Darren Shan. I was fond of the creepy, scary novels when I was younger and was pretty excited when the movie adaptation came out in 2009. I never got to see the entire film until yesterday though.

It’s upsetting that it’s taken me five years to see the quirky film, because looking at it now, it’s much better than what I originally thought it was. The movie is based around a 16 year old boy and his best friend. Fate has given them a flyer for the Cirque du Freak, a 21st century Freak Show that has been running for hundreds of years. END_OF_DOCUMENT_TOKEN_TO_BE_REPLACED

Guys, I was really excited for this new installment of the Percy Jackson franchise, because I read like the entire first series within 3 months. Mind you it’s a young adult series and I was in my first year of college when I got wind of the books. But I just couldn’t but any of the 5 down! Percy Jackson and the Olympians was exactly what I wanted in a book series and had been needing ever since that bitch Rowling decided to end my favorite franchise. Excuse me, J.K. is not a bitch, I’m just upset that I’ll never have more Harry Potter in my life. Which, by extension, is undoubtedly her fault. END_OF_DOCUMENT_TOKEN_TO_BE_REPLACED