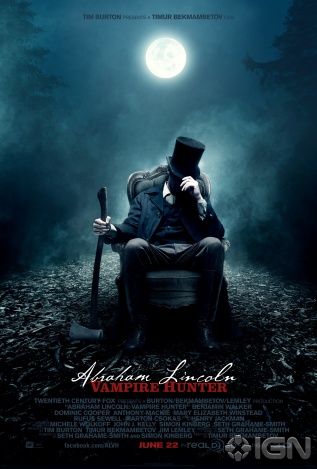 And the B.A. poster

Recently I wrote a thesis for my Vampire in Films class on Vampire Hunters and Slayers. While researching the topic, every time I “googled”Vampire Hunter it brought up something or another about honest Abe. So I said to myself “for fucks sake fine! I’ll read the damn novel.” So I purchased Seth Grahme-Smith’s novel and began the “autobiography” of Abe Lincoln that no one ever knew existed.

Now I watched this video before the book made it into my hands, at least I believe it was this video: http://www.youtube.com/watch?v=X58RPS665V0 After watching said video I was then under the impression that Abe would be kicking ass as the president! Seems that way doesn’t it? But it is a life journey we get instead, which is still entertaining yes, but nonetheless not what I was expecting. And (a small spoiler alert) he pretty much stops hunting vampires when he becomes president. I was filled with disappoint when he claims he never wants to see another vampire as long as he lives!

I will say that if you took out the vampires you have a pretty well researched account of the history of Abraham Lincoln in your hands. Then there are some decently gory scenes in the novel as well (with the vampires back in). I have never read any other novels by Grahme-Smith, although I have always intended to, but I will admit I was a bit let down by this novel. In no way is it an “I can’t put this novel down” book, because it isn’t. I can usually read a book in about a week, but with taking 18 credits in college I am pressed for time. I started the book at the beginning of February and finished at the beginning of April. That’s two months. AT LEAST doubled what it should had been without classes. It’s not difficult by any means but it’s not gripping for my attention either.

For once I can honestly say that the movie may be better than the novel, here’s the trailer for that one http://www.youtube.com/watch?v=34x6m-ahGIo and really that just looks DAMN NEAR AMAZING! The poster even tells me that he’s hunting vampires during the presidency years, therefor makes me more excited than the book did.  I was told today that Grahme-Smith wrote the screenplay for it though, and it doesn’t really seem like it follows the book to the letter. Which I think is a good thing. But honestly how often in Hollywood does the author of the book get to write the screen play for the movie, and IF THEY DO, how often do they change the plot or details? Honestly I have no idea, but it does just seem out of the ordinary to me. Tim Burton also plays a hand in the adaptation of the movie, so hopefully this will be a redeeming quality and not a remorseful one.

Anyways, I did like the ending of the book, that was one thing that surprised and bestowed pleasure for me. There are also chapters in the novel that are heart-wrenching. And of course the civil war was fought because Lincoln was filled with benevolence over  the innocent spilled  blood of the slaves, so he served justice against the South, the South that was colonized by bloodsucking parasites; vampires.

All in all it was a good novel, just not a great one, but the movie, that is going to be bad ass.