1 & 2.) Pumpkin and Honey Bunny- two madly in love sociopaths looking to make a buck and get their rocks off. Only months after the world is introduced to Micky and Mallory Knox from Natural Born Killers we get two minor characters that set the chaotic tone of the entire Anachronic film.

3.) The Soundtrack – Not only is Quentin Tarantino known for his non-chronological director technique, but also his massive hard on for classic songs the majority of the population hasn’t thought about in years. END_OF_DOCUMENT_TOKEN_TO_BE_REPLACED

Skipping around a bit here, and writing reviews for film’s I have already seen, since I have fallen so far behind in my 100ish Days of Summer. Number 90 on my list is the 1967 coming of age film The Graduate starring Dustin Hoffman, who, the lucky dog, has already appeared on this list two other times, once for All The President’s Men and another time for Rain Mann, and I am sure he will be appearing again later.

I watched The Graduate for the first time at what might have been the perfect age to see the film, I believe I was a Junior in college and well on my way of not knowing what I wanted to do for the rest of my life. A seemingly silly, but difficult impasse that every college student faces, the same as Dustin Hoffman‘s character Ben Braddock, a recent college graduate, home for the summer. Bored and complacent, and lacking a sense of direction, Ben begins to “accidentally” have an affair with his soon to be girlfriend’s mother, the elusive Mrs. Robinson (notice the “Mrs.” she is married at this time). Although the film has no real driving plot and the characters themselves seem listless and underwritten, the film has been selected for preservation because of its “culturally, historically, or aesthetically significance.”  Some people may believe that this film should be watched by everyone at least once, but at the age of this twenty-something-year old, it is a bit lost on me. Maybe with more age, I would appreciate why this film is considered one of the greats, but as a product of the 90s and the new millennium, the time, acting, and writing, is mostly lost on me.

It was by no means enjoyable to watch, but I appreciated what the 106 minute film set out to do and why it is considered great, but the only the thing I really took away from The Graduate was the amazing Simon and Garfunkle song that is still popular today, and that ending scene. I suppose, that currently, in my eyes, Dustin Hoffman is 1 for 3 in films on the top 100 list and whether the films deserves the spot. 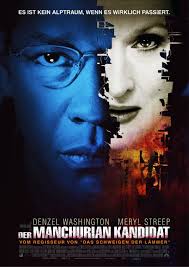 Whoa, whoops, so as I was doing my typical Google search to pull up my typical hyperlinks for my reviews, I might have realized I watched the wrong Manchurian Candidate. I had not double checked my list, but recalled that The Manchurian Candidate was on my list and I found it on Netflix, little did I realize that I was suppose to watch the original 1962 film, which is not on Netflix. So this review will be for the 2004 film starring Denzel Washington & Liev Schreiber which is not in the top 100 list and ranks with an 81% on Rotten tomatoes instead of a 98% which the original scored.

The drama, thriller, mystery focuses on soldiers kidnapped and brainwashed during the Gulf War. The scary bit about it though, is that the poor soldiers are brainwashed by American scientists in order to help ‘suade the nation into believing that   Raymond Shaw (Schreiber) is the perfect candidate for the next Vice President of the United States. The plan actually works as well.

The movie is well-acted, a bit hard to follow (which was the purpose), and interesting to watch. Overall, it is a great film to watch for any history buff or conspiracy enthusiasts.  I don’t believe it should be on a top 100 list, but perhaps the original should be.

I am just as boring as this poster depicts. It is not false advertising.

Damn if this movie wasn’t misleading, The Conversation (1974) starring Gene Hackman as the lead, Harry Caul, and (hardly in it, Harrison Ford) is a Drama, Mystery, Thriller based around a secret surveillance expert (Hackman) and his recorded conversation of a couple he was spying on in the park for a very secretive client.

The movie is slow-paced, had forced love interests in it (because really, even in the 70s, was Hackman considered a sex symbol? How much suspension of disbelief is expected of me for this film?), and probably only did well in theaters and with critics because it was the 70s. You know, that time in American history where no one, especially the government could be trusted? We had that whole Soviet Espionage thing happening, and every person everywhere thought they were being spied on, or phone tapped, or that a sleeper agent could “wake” at any moment.

The movie hardly held my interest and was far too long, dragging on for 113 minutes, and was directed by “all star” Francis Ford Coppola, regardless of the director and 3 Academy Award Nominations, the film doesn’t hold up for this new generation of movie goers. What was frightening, and psychologically tormenting about this film doesn’t translate for us today. It was placed on my list as #93 but doesn’t deserve it.

The Conversation  has a rating of 98% by critics and a shocking 90% by the typical audience. Do not attempt to watch this movie unless you were born after the year of 1980. Even that is pushing it. 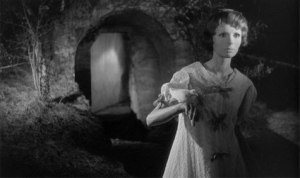 One of the most influential horror movies, Eyes Without a Face, delivers an eeriness with its’ plot that would be considered torture porn if remade/re-imagined for today’s audience. It is a 1960 French film (originally called Les Yeux Sans Visage) that focuses on the classic mad scientist bit, a man torn because he want’s his now inexplicably faceless daughter to have a face again. Docteur Génessier (Pierre Brasseur), with the help of his assistant, Lousie (Alida Valli), kidnaps countless women, all with the same physical appearance as his “missing/dead daughter ” (or so he would like the public to think): brown hair, blue eyes, and a defined, beautiful facial structure. The doctor performs these extreme plastic surgeries where he removes the face of the kidnapped woman and then transplant the face (quiet literally just the skin) onto his daughter.

Did I mention that it’s never explained upon why Christiane Génessier (Edith Scob) doesn’t have a face? Oh I did? Seriously, I would like to know what the fuck happened to her original face, if anyone reads this, and actually knows, please for the love of all that is sane,  tell me why. Not sure if I had missed the explanation because I, being American, had to read the English subtitles and something just went over my head or it was lost in translation.

Anyways, the actors in the film all do a wonderful job, and the ending of the film is hauntingly beautiful and horrific. On the list that I have compiled for my 100ish Days of Summer it clocks in at number 94, and with good reason. This movie paved the way for classic horror movies, that may not be featured on this list, but would be featured on my own personal top 100 list. The two most important elements of  Georges Franju‘s Eyes Without a Face are by far the musical composition and the mask that cover’s Christiane’s frightening exterior of what is really, a girl misguided by a father whom was tolled by grief. Wouldn’t any loving father do anything to make his daughter stop crying?

Eyes Without a Face is certified fresh with 98% and an 88% for users, it went on to inspire pop icon Billy Idol’s Eyes Without a Face. The film can be found on torrent sites but is also on Hulu? So says my internet search. If your big on horror, this is one film every scream queen should get around to watching.

Ahhh, Stanley Kubrick’s A Clockwork Orange, a film adaptation of Anthony Burgess‘s  novella about a hyper-violent youth group in a dystopian future Britain which comments on juvenile delinquency, psychiatry, youth gangs,  along with social, economic and political subjects. One of the most difficult film’s to watch on this list. So much so that I could not bring myself to watch it again, for a third time to review it with a fresh viewing. This is also a bit of the reasoning behind the giant lag in my 100ish Days of Summer. I have loaded it up 2 or 3 times int he past few weeks, and haven’t been able to really push past the first 10 minutes. Don’t get me wrong, the film is one for the ages, premiering in 1971,  A Clockwork Orange symbolizes everything that was wrong with the rambunctious youths of England in the sixties and the fearful advantages that science takes in “curing” the “wicked.” END_OF_DOCUMENT_TOKEN_TO_BE_REPLACED 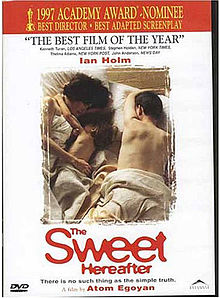 The Sweet Hereafter is a film you don’t watch for enjoyment, it’s not something you toss on the TV on a rainy day; it’s one of those films you watch when you want to feel, when you want your heart to break, when you want to be reassured that everything will not be alright. The Sweet Hereafter is a punishment of a movie, it is what could be described as paradoxical: people watch movies and TV shows to escape their everyday problems, to drown out the cries of starving children, homeless veterans, abused pets, and the mutilation of third world countries. When we turn on the television or head to the cinema we put on blinders for a few hours and ask to be whisked away from all the disappointment the world shoves down our throat every day.

END_OF_DOCUMENT_TOKEN_TO_BE_REPLACED Robbie the Robot never carries this damn bitch in the film. Misleading poster.

The 1956 cult classic, Forbidden Planet, slots in at Rotten Tomatoes‘ #98 top-rated film, mostly for genuine fun reasons. By all means, this film is a classic “science fiction B” movie, that I was surprised to find on the list. Usually, one does not find “B movies” in a top rated list, but MGM’s tale of a nearly abandoned planet, a humorous robot, and a father that has inexplicably kept his daughter away from all human contact, makes it on to the tail end of the list. END_OF_DOCUMENT_TOKEN_TO_BE_REPLACED

Today we start 100 days of Summer, where I visit movies on the top 100 Films listed on  Rotten Tomatoes and say a few words about the film and whether or not it stands up to the hype. My first review begins with the last film on the list, All the President’s Men which came out in 1976 and depicted the events that took place to crack the biggest crime of 1972: The Watergate Scandal.

The movie features Dustin Hoffman and Robert Redford as Washington Post reporters Carl Bernstein and Bob Woodward, the same reporters that cracked Watergate. Over all, I believe that the movie is incredibly dated, and although it would have been a marvel of a film in the seventies, today, it wouldn’t even be able to hold a History students attention. Although the film is certified with a 98% score on RT, the movie is slow-paced and lacks any sort of soundtrack and female characters. If there is one thing for sure about All the President’s Men, it is that it is a portal into the past and gives the viewer a perception of the events that took place during Nixon’s presidency.